Front: Hours and 2nd time zone at 3
Minutes in the centre
Sunrise and sunset at 12
Sidereal hours and minutes at 9
Power reserve at 6
Moon phases at 5
Second on disc at 7
Back: Equation of time in the center
Annual calendar at 10

Number of parts :
At the heart of the movement
Technical description 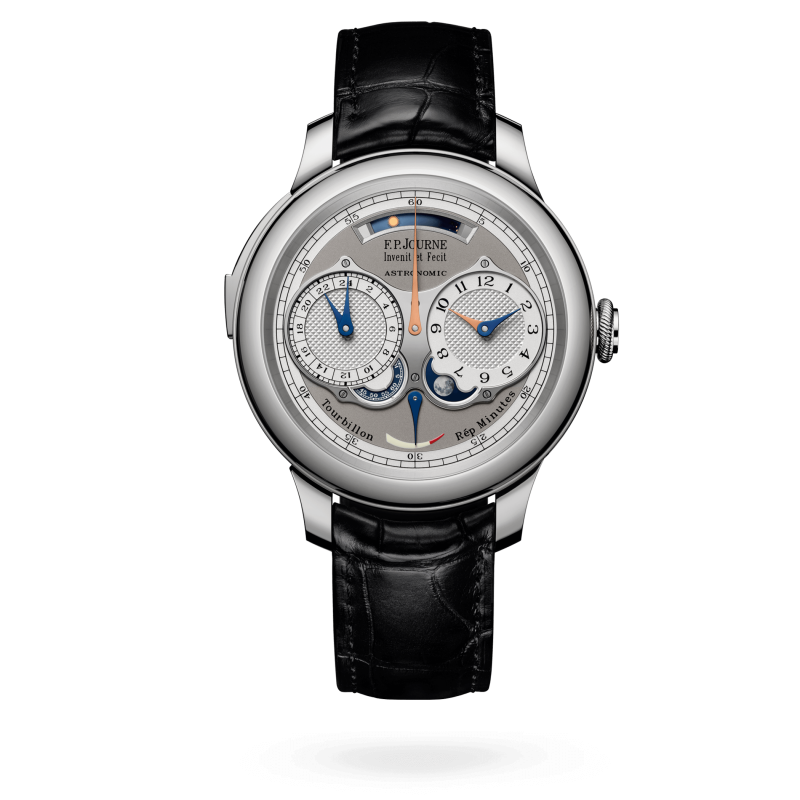 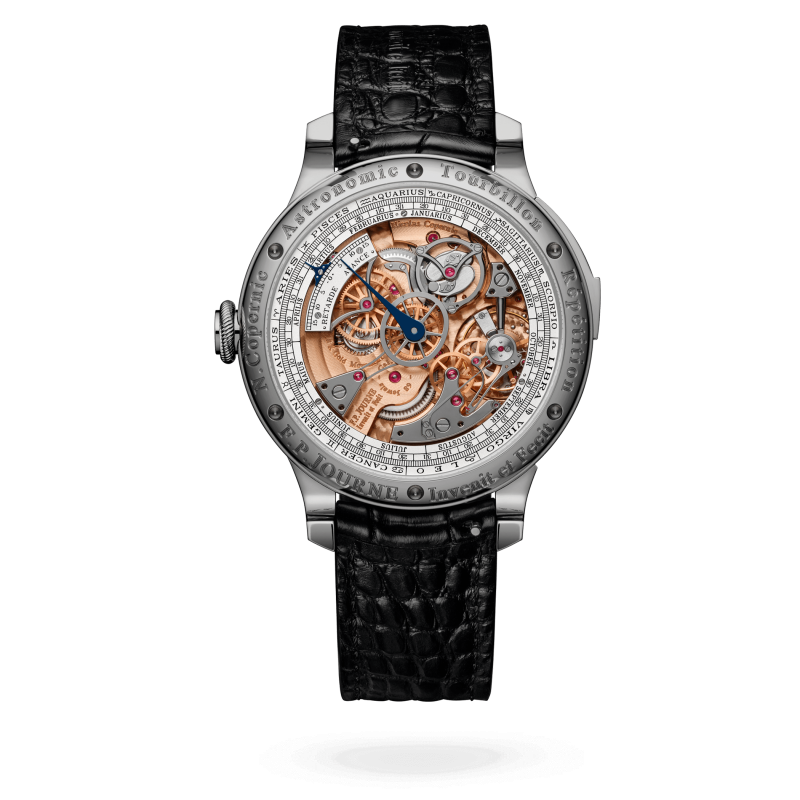 After the success of the prototype’s sale at the Only Watch auction, F.P.Journe presents the final version: Astronomic Souveraine. It is a grand complication watch in a steel case, with tourbillon and minute repeater, whose vocation is to recall a long-forgotten gesture. That of losing oneself in the stars in order to better find one’s way on Earth. There was a time when that poetic idea was not a paradox, but a self-evident truth. And like the instruments that were once used for the observation of the stars, the Astronomic Souveraine is above all a tool. But rather than opening a window onto the celestial vault, it celebrates Time in all its glory.

The inspiration for the project was an adolescent’s drawing, found crumpled up behind the wastepaper bin. That sketch was done fifteen years ago by François-Paul Journe’s son, Charles. Having drawn the sketch almost without thinking, on second thought the young man decided it was not appropriate. After all, he wasn’t the watchmaker in the family! And yet… On the dial, there was a curved aperture for the path of the sun. It was a good idea. But what could be done with it? A self-winding watch? Why not? As long as there were not too many additional complications. François-Paul Journe began his research. His quest for the ideal watch took six years. And finally, it was back to the drawing board. The watch would have a manual-wind calibre that would allow more functions. It would be necessary, however, to ensure the delivery of enough energy to power all of them.

One of F.P.Journe’s earlier creations served as his inspiration: a pocket watch with planetarium made in 1987 for a collector of scientific objects. That unique tourbillon watch indicated mean time and sidereal time, as well as the equation of time, a full calendar, and the power reserve. However, there could be no question of looking backward. The future astronomic watch had to be resolutely contemporary and possess a distinctive personality. Its power would come from a double barrel. And the tourbillon with remontoir d’égalité would guarantee its perfect isochronism.

Nevertheless, the 18 carat rose Gold movement of the Astronomic Souveraine is totally novel. And it is, of course, very finely decorated. For example, the white Gold dial, whose sub-dials are embellished with clou de Paris decoration, and the moon phases, with a hyper-realistic moon that was traced from a NASA photograph. At 3, there is the mean time (or civil time) dial, with a blue hand indicating a second time zone. At 9, there is the sidereal time dial, which allows the observation of the stars. Next to it, the mean time seconds are shown on a disc. Between the two are the central minutes and the power reserve indication, which remains optimal up to 40 h. Above all this is a blue aperture showing the sunrise and sunset. Here, metal shutters lengthen or shorten the days. On the reverse there is the equation of time and a full annual calendar encircled by the signs of the zodiac. It is on this side that the dance of the tourbillon may be admired.
In all, this watch, which also strikes the hours, the quarters and the minutes, possesses 18 functions and complications. It is made up of 758 components, in addition to the case. However, the case is no larger than 44mm in diameter and 13.80 mm thick. But watch lovers will have to be patient, as only a very few pieces will be produced each year.

Front: Hours and 2nd time zone at 3
Minutes in the centre
Sunrise and sunset at 12
Sidereal hours and minutes at 9
Power reserve at 6
Moon phases at 5
Second on disc at 7
Back: Equation of time in the center
Annual calendar at 10

Number of parts :
At the heart of the movement
Technical description