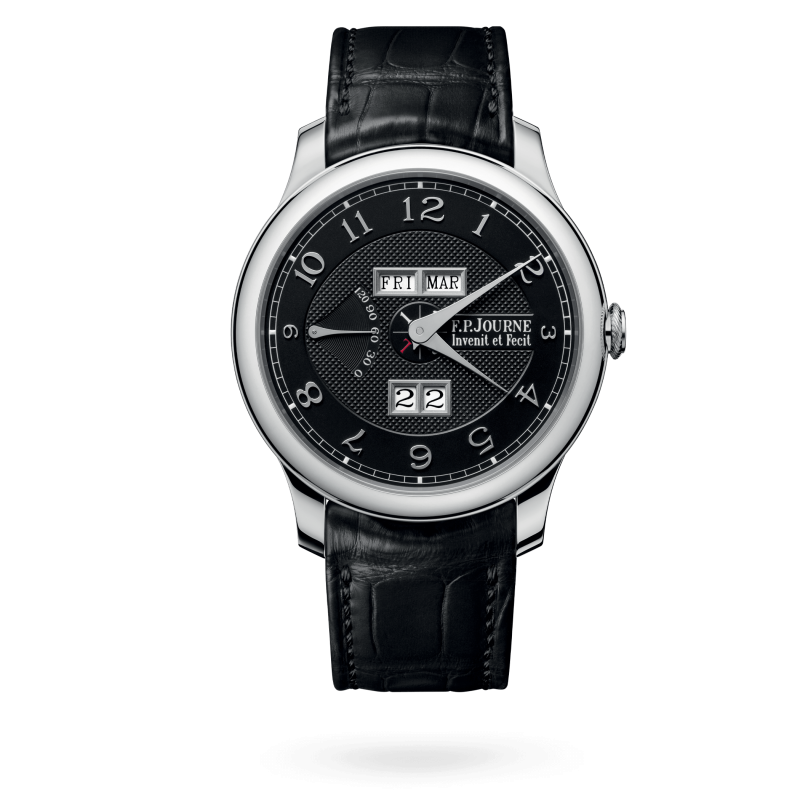 Optimum readability and simplified use for the F.P.Journe Quantième Perpétuel with instantaneous jump.

During the 18th century the astronomical watches gradually gave way to the manufacturing of watches showing the date and, usually, the moon phases. These primitive calendar watches were all of the simple calendar type that is to say that at the end of each month of less than 31 days, the days hand had to be put forward manually. Adding to the movement the complicated mechanism of a perpetual calendar, in which, every four years, the 29th of February would be automatically recorded, had long been the dream of every watchmaker.

The F.P.JOURNE Quantième Perpétuel (perpetual calendar) displays the exact date by automatically taking into account the variable length of the months and leap-year cycle. It also displays the day, month and often the moon phases. To accomplish this watchmaking feat, the movement must have a mechanical "memory" of 1461 days or four years. The mechanism is usually based on a differential gear system from the hour wheel and includes several hundred components, cogs, gears, levers and rockers. Despite their name, perpetual calendars will have to be corrected by one day on 1 March 2100, not through any fault of the mechanism but due to the Gregorian calendar, which rules that this year, as three centennial years out of four, will not be a leap year.

A movement able to identify leap years has a real mechanical memory. A small toothed planet wheel connected to the month’s mechanism performs a complete rotation in four years. During the fourth year, this mechanism displays 29 February before directly moving on to 1st of March. Just as the moon moves around the Earth, this planet wheel rotates on its own axis resting on a swivel wheel. This complication, which is both useful and demonstrates technical prowess, is one of the masterpieces of the watchmaking art.

The F.P.Journe Quantième Perpétuel with instantaneous jump presents a distinctive aesthetic compared to all existing perpetual calendars in offering perfect readability through an uncluttered dial with large apertures: two for the day and month calendar, and a large date in two windows, a specificity of F.P.Journe watches. The instantaneous jump is reinforced by an ingenious F.P.Journe system designed to accumulate energy and release it instantaneously when the date, day or month changes; and then slow it down at the end of its route.

Unlike perpetual calendars that are often difficult to adjust, the F.P.Journe Quantième Perpétuel is very easy to use. All corrections are made using the three-position crown, except for the rapid correction of months, which is carried out by a protected and hidden corrector lever beneath the lug at 1 o'clock. It thus facilitates the adjustment over four years without any specific tool.

The months with 28, 29, 30 and 31 days are automatically taken into account with recognition of the leap years shown in the centre of the dial under the hour and minute hands. The years 1, 2 and 3 are shown in black, the leap year as L (leap) is shown in red.

The automatic winding movement of the Quantième Perpétuel by F.P.Journe -Invenit et Fecit is manufactured in 18K rose Gold, like that of all the brand's precision chronometers. It is constructed on the basis of the exclusive Octa calibre 1300.3. It also features the exclusive off-centre F.P.Journe rotor in 22K 5N Gold that offers optimal winding of the watch for an effective power reserve with retrograde indication for over 120 effective hours. It winds the movement in only one direction with an autoblocant ball bearing system (self-blocking). Every infinitesimal movement of the wrist is thus maximally exploited for an optimised winding of the watch.
Testimony
Calibre OCTA