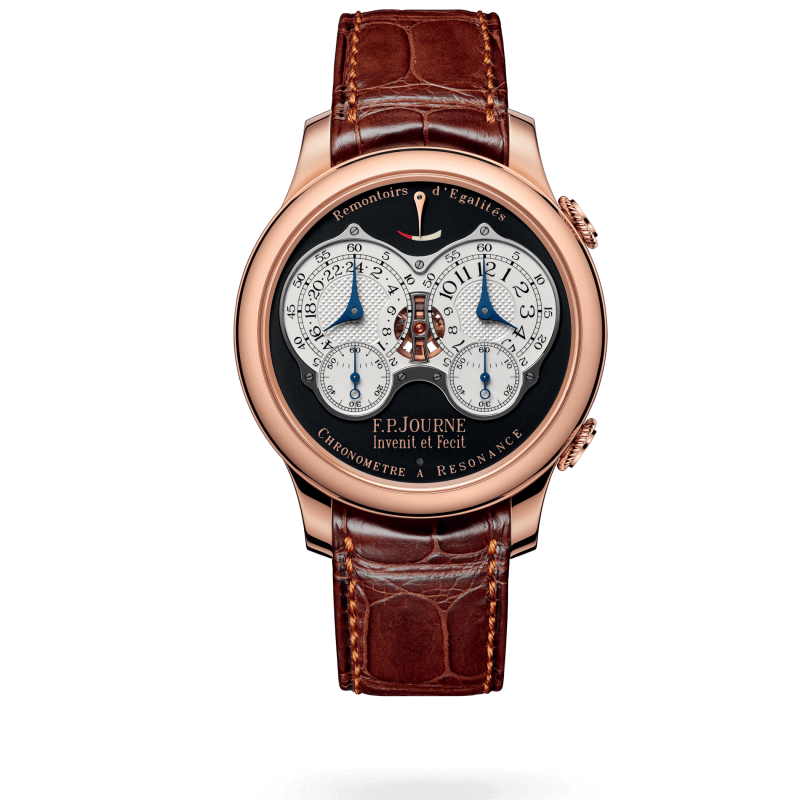 THE CHRONOMÈTRE À RÉSONANCE BOUTIQUE EDITION WITH BLACK DIAL ON 18K 6N GOLD CASE IS AVAILABLE ONLY IN THE F.P.JOURNE BOUTIQUES AND ESPACES AROUND THE WORLD.

The first observations pertaining to the natural resonance phenomenon were made by 17th century Dutch scientist Christiaan Huygens, followed by 18th century horologists Antide Janvier and Abraham-Louis Breguet, who developed timepieces based upon this principle. Since then, François-Paul Journe presented his first Résonance wristwatch in 2000, it was baptized Résonance under the patented brand name Résonance®.

The F.P.Journe Chronomètre à Résonance is the only wristwatch in the world that utilizes the physical natural resonance without any mechanical transmission phenomenon, previously known as double pendulum or double balance.

The new Chronomètre à Résonance has only one single barrel spring to provide power for the two movements. A differential placed on the first wheel, visible in the centre of the dial, transmits, independently, the energy of the barrel spring towards the two secondary gear trains. Each secondary gear train is equipped with a Remontoir d’Egalité of a frequency of 1 second. Working in such a way, the force received by the escapements remains linear and assures isochronism throughout 28 hours.

The Chronomètre à Résonance features a redesigned case with a crown now placed at 2 o’clock easing the winding of the watch in position 0 and the time setting in position 2, clockwise for the left dial and anti-clockwise for the right dial. The pulling of the crown at 4 o’clock simultaneously resets both seconds.

On the movement side, 2 «Remontoirs d’Égalités» (constant-force device) provide a linear force to each of the two balance springs to remain isochronous during 28 hours.

"I will try to explain the historical reasons that led me to build such or such a watch. As far as the resonance phenomenon is concerned, the intuition that energy is dissipated without being lost goes back to the 18th century and the research performed by the great chemist Lavoisier, who stated in his famous theory which highlights my modest explanations: "Nothing is lost, nothing is created, everything is transformed". With the invention of the pendulum, watchmakers noticed that their beat often interfered with their environment and it was not unusual for a pendulum clock to stop of its own accord when the pendulum came into resonance with the driving-weight suspended from its cords.

After the theories of Christiaan Huygens, The brilliant watchmaker or "mechanical engineer" as he described himself, who was the first to have the feeling that one might use turn this disadvantage into an asset: Antide Janvier, born in 1751 in St Claude, France. His idea was to build two complete movements with two precision escapements and to place them close to each other, ensuring that the two pendulums were hanging from the same construction. Just as he imagined, the pendulums recovered the energy dissipated by each other and began to beat together, thus entering into resonance. Maintained by this wave and thus protected from outside vibrations, this principle considerably enhanced their precision. About 1780, Antide Janvier built two precision regulators, one of which is preserved at the Paul Dupuy museum in Toulouse and the second in the private collection of Montres Journes SA, Geneva. A third desk-top regulator is kept in the Patek Philippe Museum in Geneva. Thirty years later, Abraham-Louis Breguet built a resonance regulator for Louis XIII, King of France, which is now part of the collection of the Musée des Arts et Métiers in Paris; and a second for the King of England, Georges III, which is housed in Buckingham Palace. He also made a pocket-watch based on the same principle for each of these illustrious figures. To my knowledge, no-one else in watchmaking took any further interest in this fascinating physical phenomenon! The advantages of this phenomenon in terms of precision led me to pursue my own personal research and attempts which, after fifteen years, enabled me to adapt it to a wristwatch, the Chronomètre à Résonance. I felt that this resonance system was particularly well suited to the various wrist movements that subject watch mechanisms to repeated jarring which is detrimental to their smooth running.

The new Chronomètre à Résonance has only one single barrel spring to provide power for the two movements. A differential placed on the first wheel, visible in the centre of the dial, transmits, independently, the energy of the barrel spring towards the two secondary gear trains. Each secondary gear train is equipped with a Remontoir d’Egalité of a frequency of 1 second. Working in such a way, the force received by the escapements remains linear and assures isochronism throughout 28 hours".